What are boosts in Spells of Genesis? 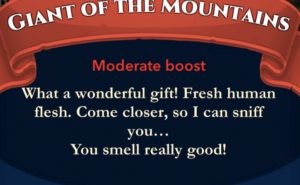 In Spells of Genesis a boost is an additional power given to your opponents orbs. In early versions of the game, the power of an enemy was signaled by the size of its orbs. But to avoid increasing the size of the enemies’ orbs and cluttering the battlefield, we’ve introduced boosts to indicate that you’re facing “supercharged” opponents.

Your cards also get a bonus we call “element rules”. It is indicated at the campaign screen (for example water +3 attack). These rules only affect your own cards.

What is the difference between a boost and a handicap?

There are no difference between the two, it’s just a question of perspective. Your enemy’s boost is your handicap and vice versa. Your cards are thus a bit more susceptible to get bigger damages from your opponents’ attacks when those get a boost. In the same way, your opponents’ orbs will get bigger damages from your attacks when you get a bonus..

How do boots affect your cards?

In each campaign starting from Mother Bird, some of your cards may get an additional bonus. The type and value of the boost depends on the Element of the card and the campaign being played. Bonuses increases the attack and health of your cards by a certain amount..

When are boosts activated ?

Boost are only activated from the fourth star of each campaign. The table below details the boosts increase per star. 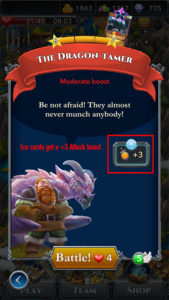 For example, on the Dragon-Tamer Campaign screen, you can see that your Ice cards will get a +3 Attack bonus. By placing an Ice card in your team your card will then benefit from this attack bonus.

The « Moderate Boost », indicated by the text under the red banner means that you are facing stronger opponents. But the “boost” that your enemies get is unrelated to the bonus that your cards get. So Moderate boost does not relate to the ice +3 attack.

In our example, we’ve added a Cloud of Weasels (blockchain) Ice card which initially doesn’t have much attack power.

When launching the Dragon-Tamer campaign, our Ice card display the +3 Attack bonus on its icon.

This means that our Cloud of Weasels card now has a +3 Attack bonus.

The more you progress in the game, the more you may want to take advantage of the campaign bonuses against stronger opponents. Make sure you place the right cards/Elements in your team to optimize your chances of winning a level or a campaign. This is especially true for those who play the monthly campaigns where you have to get the right deck and strategy.

In Raid (a.k.a. PvP) mode, your opponents get several kinds of boosts but some of your cards will also benefit from an increase in Health or Attack. Below you’ll find the list and percentage of boost your opponents get in Raid mode. 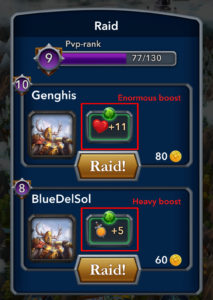 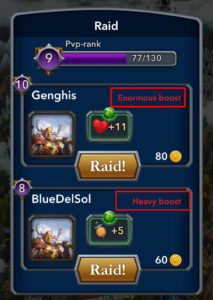 In this example, Player Ghengis gets an Enormous boost and player BlueDelSol gets a Heavy Boost. This increases their stats by a certain percentage.

However, as you climb up the PvP ladder, you’ll be facing stronger opponents with stronger boosts.

Read our tutorial on Spell All Cards!

HOW TO CREATE A SPELLS OF GENESIS ACCOUNT AND BIND YOUR WALLET Simply install Spells of Genesis (SoG), create an account and bind your wallet for a chance to win from 10 prizes of $10 Read more… 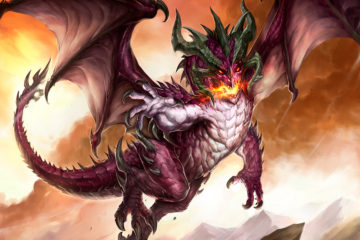 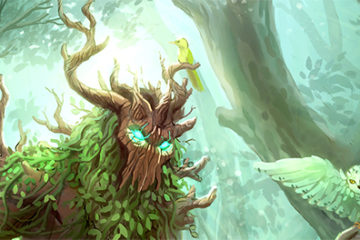 STRATEGY 101 – Boss level: The Wooden Monster In this new article we are going to focus on the first Boss level of Spells of Genesis and tell you what’s the best strategy to defeat Read more…